A few weeks ago, Lidia Bastianich, Italian Chef, PBS Television Star, Restaurateur and all around authority on authentic Italian Cuisine, came to my Philadelphia Williams-Sonoma store at The Bellevue in Center City. I had the opportunity to work the event, as it was on a Tuesday and I currently have Tuesdays off for "maternity/parental" leave. As the former resident chef at the store, occasionally I get the chance to work and cook for the chef author events when I am available. 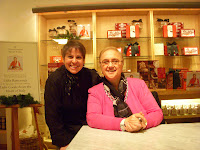 Being a celebrity chef 'ho, I didn't want to miss meeting Lidia and adding to my collection another autographed cookbook. Mrs. Bastianich's publicity folks asked that the store make two of her current recipes from the latest cookbook - Lidia Cooks From The Heart of Italy. Resident Chef Margaret made Lidia's Sausages in the skillet with grapes; I was asked to make her Chocolate Bread Parfait - a cross between a summer bread pudding and tiramisu. 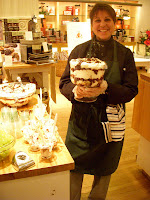 We had a lovely turn-out for the event; Lidia Bastianich has a devoted following. She is in person just as you see her on television - direct, authoritative without seeming cold and mean, and regal. There wasn't the same electricity and excitement in the store as when Martha Stewart was there, nor was there the same giddiness in the air at meeting the sexy-rock-star-Top Chef, Tom Colliccio. Ah, well, you can't always have those mega watt shining moments. We made beautiful food, enjoyed several hours with customers and a celebrity chef. It was a good day with a good recipe, which I've made slightly easier for all.
Spoiler Alert: Recipes LIE. I've known this for years, I've heard chef's say this, I've read it, and recently I heard a chef on Jim Coleman's WHYY's Radio Show, A Chef's Table, say that even the best cookbook recipes lie. What this means is the recipes don't always work at home. Commercial ovens are different, hotter and more exact than our home ovens. Quantities are exact but most cooks ad-lib it with ingredient amounts. Upon reading Lidia's recipe as it was written, I found it complicated and inexact. Primarily my issue was with how the chocolate is melted. To this end, I deconstructed the recipe and used ingredients that I knew would work well. I used the Williams-Sonoma Hot Chocolate Mix; it's shavings of high quality Guittard pure milk chocolate, which melt quickly. I switched out brewed espresso for instant; for the demonstration, I used a combination of Metropolitan's Brioche and Country White Breads. However, I learned that this recipe really works better with the Country White Bread - it holds up better and soaks up the chocolate without falling apart. As for working with melted chocolate, one needs to realize that melted chocolate can easily seize when combined with other liquids. I opted to melt the chocolate with a bit of heavy cream, adding in some fat to help the chocolate melt and blend easily with the espresso and rum. By the way, this is not one of my healthy, lighter, Weight Watcher's Recipes. I wouldn't have made it on my own, but...It is the holiday season. Enjoy!
Chocolate Bread Parfait Pudding - adapted from Lidia Bastianich's Lidia Cooks from the Heart of Italy: page 221; an Umbrian dessert recipe.
Directions:
Email Post
Labels: "Williams-Sonoma" chocolate cooking dessert recipes