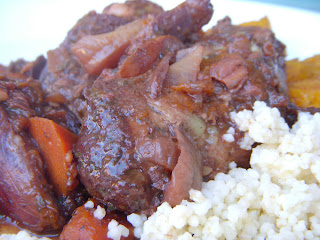 One Pot Slow Cooking Alert! Here's another set it and forget it recipe for ya, yins, youse guys. I am all about tossing a few ingredients and some cheap ass cut of meat into a Dutch Oven pot, placing it into a hot oven and forgetting about it for oh, say 2 to 4 hours. No more searing and transferring hot stuff to a Crock Pot, dirtying up the stove, counter tops and endless pots, plates, tongs and such. Easy peasy cooking. Pinch me, I think I turned into Rachael Ray (YUCKO!) and may have my Martha Stewart card revoked!
Susan Hill brought me a lamb shank she found on manager's special at the grocery. After a few days of thinking about the best recipe for the shank, I realized I needed a bit more lamb. What should have been a cheap meal became a more expensive endeavor because I went to Whole Paycheck to buy more lamb to add to my one-pot dinner. Don't fall into this trap! Lamb shanks or shoulder are inexpensive at every other grocery or butcher. I just happened to be at Whole Foods so that's why I spent the big bucks. However, considering I spent an additional $18 for more lamb, I did feed three people hearty servings and we have at least 4 more meals left over. Cost per serving, around $2.5 per person. So, in a sense, this is an inexpensive meal to make. Think about what you would pay in a restaurant, my guess is the dish would be at least $18 to $22 per plate.
Taking stock of what I did have on hand, I used some Zatar Seasoning I had from Cost Plus World Market (though you could use curry powder), prunes (call them by their original name, not dried plums, don't be fooled!), apricots, onions, carrots, garlic, red wine and Worcestershire sauce , cinnamon sticks, clove and all spice. The overall dish has a vague Moroccan/Middle Eastern Flare. If you don't have Zatar, and really, who happens to have it except nut-case cooks like me? It's a combination of marjoram, oregano, sesame seeds, sumac, and thyme. A mild curry powder is nice. As for wine, a dry full-bodied red is best, don't buy a cheap cheap bottle, but at the same time, don't waste two cups of an expensive wine either. A $10 bottle of a Cabernet will be fine. 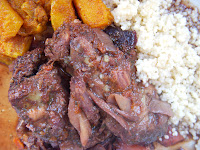