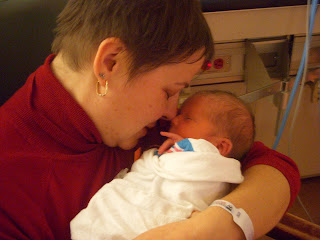 We've been a little bit busy these days. The baby is now 10 days old. Hard to believe that he's only been in our lives for 10 days! There have been multiple daily trips to the hospital to see him, feed and cuddle with him. For the most part, we - mother, baby and momma, are doing well, though it is difficult to have to head out each day to visit him and then to have to leave without him. He's doing better each day, getting stronger and growing a bit. Considering he still had about 5 weeks to go, he's doing extraordinarily well. The nurses have told us that he "suffers" from "Wimpy White Boy Syndrome." Whereby the premie white males tend to be lazy or immature eaters! Yikes - my boy a lazy eater! No son of mine should ever be considered slow to eat. He's reached all of his major late-term premature baby milestones though - he's now gestationally 35 weeks old, can hold his body temperature outside of the isolette (aka, the incubator), and has gained some weight after having lost a few ounces from his birth weight. The biggest hurdle to overcome is getting him to eat entirely from a bottle and not have to take his feedings via a tube gavage style. Poor little gossling! We figure we'll work on the nursing later - his mouth wants to work on learning how to nurse but his mouth is too small and his latching skills aren't up to snuff yet. In the meantime, we've been heading to the hospital at least two times a day for a few hours. When not at the hospital, we've been trying to have some sort of routine. I finally got most of the house cleaned and organized; cooked a bunch so we could have some decent meals and got his nursery and clothing sorted. Heck, I even found time to can four jars of applesauce - the last of our organic apples from the farm share. Hopefull in a few months time, when the Nibblet is on solid foods, I'll be feeding him from my organic pantry storehouse. For future Nibblet News - We'll be posting at our other blog - Nibblet News - http://nibbletnews.blogspot.com As of today, we don't have any posts up. Videos, pictures and baby food recipes will be forthcoming!
Email Post
Labels: baby Family