May I Present to You: Nathaniel Paul 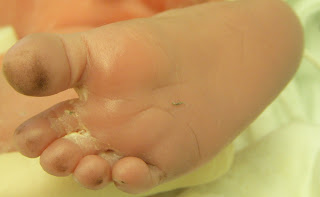 The birth of our son came as a quick surprise. The Phillie's game was on the television, Thursday evening, October 15, 2009. The Phillies were playing the LA Dodgers in California and the game was ending in a loss. Liz and I were both in bed; I was just drifting off into sleep. Around Midnight into Friday morning, Liz had a strange sensation and thought her water had broke. She threw back the bed sheet and discovered that it wasn't water, but rather, blood, a lot of blood. I hear from inside my sleep distance, "OH NO! There's blood!" Liz rushed into the bathroom, leaving a trail. I jumped out of bed and start running around frantically. Liz is calming telling me to call 911. I'm screaming, "Should I call the Doctor? Should I call our Neighbors? Should I take you to the Hospital?" "NO! CALL 911!" yells Liz. She's strangely calm. I on the other hand, am crazed. After several more "OH MY G*D's" and a call to 911 later, Liz is instructed to lay down on her left side. She's so quiet. I covered her with a blanket and we waited for the rescue squad. Hamlet, the dog was barking and Liz tells me to go get dressed, put on a bra, socks, shoes and take the dog to the neighbor's. Out into the street I go, waving down the rescue squad and into the neighbor's house I ran, tossing Hamlet towards Michele and Fabrizio. Within minutes, four strapping firefighters come into the house and upstairs to talk to Liz. After a few questions as to her current state, how far along in the pregnancy she was, Liz was put onto a stretcher and taken to Penna Hospital. Once admitted, Liz was whisked into a labor and delivery room and checked and monitored. The doctors thought that Liz was experiencing Placenta Previa - where the placenta moves down in the uterus and covers the cervix. Either that or it had moved and caused a tear. Whatever the case (we are all still unsure) the doctors determined that the safest route for mother and son would be to deliver the baby via c-section. Liz is on blood thinner medicine, to prevent her from having a blood clot - so they waited 24 hours to have the medicine get out of her system, before they could operate. Saturday morning, October 17th at 9:30 am, they took her into the Operating Room and by 10:08, Baby Boy Nathaniel came into the world with a great big yelp! 6 pounds of pure love and energy. Nothing like a fairly quick delivery to take all of the guess work out of what needs to be done, how and why. Because he came into the world so quickly and unexpectedly, we had little choice for all of the decisions we thought we had to make - such as how and when will Liz's medicine get changed; when to pack a hospital bag; finishing his room and getting his gear together. Our house is in disarray, the car seat has yet to be purchased, and his nursery is only half finished. A week ago, we were attending a parenting - pre-natal birthing class. A week ago, I finally got my driver's license. A week ago, we were a two-some, contemplating the three-some we were about to become in 5 to 6 weeks. Now, I am a mother, a full-fledged driver, a grateful parent and relived partner. Whew, who knew 48 hours and 6 pounds could change your life so completely?
Email Post
Labels: Family