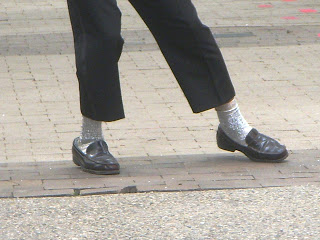 Those Loafers & The Sparkle Socks! 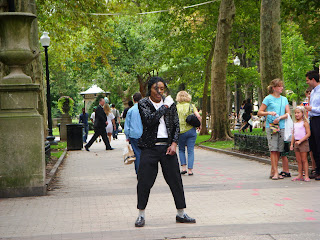 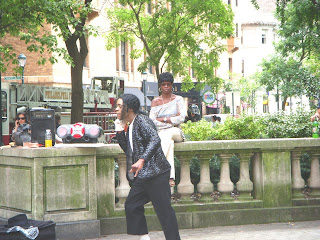 Find of the Day: Mr. Freeze, a Michael Jackson impersonator. I saw him and his "manager" setting up their boom box and collection bucket at the 18th and Walnut Street entrance to Rittenhouse Square today around noon. Perfect time to be out entertaining the lunch time crowds. The energy in and around the Square today was giddy and a bit hyperactive. Construction workers were lined up along and on the walls eating lunch and watching all the crazies go by. Two local bike couriers or courier wanna-be's were playing gags on people by "throwing" a dollar bill onto the side walk, which was tied to a length of fishing line. When someone would bend down to pick up the dollar, the guys would "reel" it in! I actually witnessed some random Joe Schmo, bend down, pick up the dollar and tear off the fishing line and pocket the buck! Priceless. I asked the guys how many times they've had someone take the money. They said that over the past 3 to 5 months they've only lost about $5! Cheap entertainment.

My video and subsequent photos of Mr. Freeze was about as inexpensive too. Take a look at Mr. Freeze's foot work. He has the moonwalk and air slide down pretty well.
Email Post
Labels: "Found Objects" "Michael Jackson" Findings