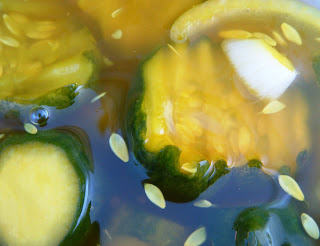 The Philadelphia Inquirer's Food Section had a front page article in today's paper devoted to canning, putting up and pickling the summer produce and fruit bounty. I've been "putting up" cans of salsa for weeks now and making my own refrigerator pickles. When you have an over-abundance of tomatoes, peppers and onions, these are the first things I think about canning. Making a batch of salsa and canning 5 or 6 jars at a time doesn't take a lot of effort, for me anyway, and I will get to enjoy my weekly CSA produce share for weeks and months to come. So far I have put up about 16 jars of salsa - three different flavors and types: peach and tomato; fire roasted tomato and tomatilla; garden vegetable chunky salsa. In addition, I've made several batches of pickled vegetables - beets, onions, celery and cucumbers and jalapenos. I haven't yet mastered the art of long storage pickling and canning so I've been making small batches of refrigerator pickles. The canning method and time for storing pickles is a longer and more complicated affair, usually taking two days of prep - brining/salting and then the boiling process.

The refrigerator pickle recipe I use as a starting point is from the July/August 2009 Issue of EVERYDAY FOOD - A Martha Stewart Magazine. This is one of the best food/recipe magazines on the book shelves. Each month's recipes are easy and seasonal and are never filled with hard to find multiple ingredients. As easy as the recipe is, I have found ways to embellish and alter it, creating my own version. Depending on what I have on hand, I've varied some of the vegetables too, adding jalapenos or beets, turmeric and traditional pickling spices. Kirby or Persian Cucumbers work best, but in a pinch, traditional unwaxed and organic cucs with seeds removed will also work. Kirby and Persian Cucumbers have thinner skin and are smaller so they tend to pickle faster. 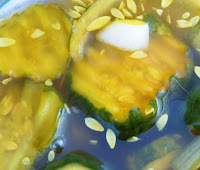