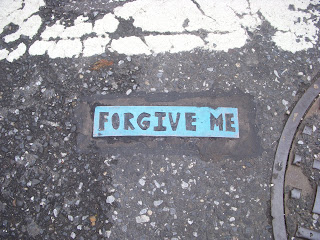 These are the 10 days of awe in Judaism, culminating in a 25 hour fast and day of atonement known as Yom Kippur. I work for a synagogue and consider myself a former Roman -Italian/Polish-Catholic who attends a Presbyterian Liberal church. My baby-mama works for a Presbyterian church and has parents who are both in the Ministry - Pop is a Lutheran Pastor, Mom is a Moravian Minister. Each parent is remarried; Step-Mom is in the Funeral Business, Step-Dad is also a Moravian Minister. My grandmother is a Pre-Vatican I-Edict-Latin-Mass-Roman-Catholic Fanatic, and my mother is a devout lunatic, so we have our bases covered for caring, spirituality, forgiveness and fanaticism I guess. Working for a synagogue is mostly wonderful, except on the days when I have to play the role of Shabbos Goy. It can be stressful, dealing with money and religious issues. I commented on Twitter last week that religion and money go together as well as fire and gasoline. I know it's no different in other religions - I hear just as many stories about my church and congregation issues. People push the envelope as far as they can and the staff, we shake our heads and say the same expression day after day - "If they could have died of shame, they would have dropped dead 20 years ago!" My boss, g*d bless her heart often says we should write a sitcom about the goings on in the synagogue and call it "Shul Business". We have a cast of characters worthy of the stock roles you find on the Fox or CW Networks. Harried Executive Director who plays the mother to all of us loonies. Sage-Wise and Witty Rabbi who smokes a good pipe, rides a cool bike, and can come up with a pithy one-liner religious statement called a Mishna Peah. There's the office executive secretary - now I'm completely embellishing this character for comic effect - who would be cast straight out of Central Casting 1950's - you know, Thelma Ritter or the sassy wise-cracking Selma Diamond type with a Millennium Flair and a chic wardrobe and haircut. We would also have two gay
characters - as we actually have two gay people on staff- myself and our beloved G Man - Mother G. He'd be the bellowing big man with the colorful coordinated wardrobe who struts about the building throwing love and attitude. My character - depends on the day and my mood I guess. Cranky but lovable, arty but sensible, sarcastic and fun-loving gay goy who needs to learn a thing or two from the wonderful cast of characters she works with. Sigh. My job. It's a good thing I like it so much.

The end of the High Holy Days always leaves me gasping for air. We work a lot leading up to the big service days then we work hard some more leading up to the final big service days. The refrain we hear year after year is, "I just moved to the neighborhood and don't have any place to attend." Or - "I'm not interested in supporting a synagogue, I just want to come to High Holiday Services (for 10 to 15 minutes) so I can pray. I don't want to pay to pray." In years past, the staff has gotten a small reprieve at Sukkot with two or more days off for the harvest festival - "And You Shall Dwell in Booths". I'm dwelling on my unhappiness at the moment. The way the holidays fell this year, there are no days off at all; most fell on the weekend and meant we had to work Saturday and Sunday for Rosh Hashana and then Sunday night for Kol Nidre and all day Monday for Yom Kippur. I choose to play martyr (I know, mixing my religion's guilt here) by working the Friday before the first day of Rosh Hashana. I figured I'd bank some time and good will towards my family leave time for the baby's birth in late November. Not such a great idea. I'm tired and miserable, more than cranky and frankly, I don't know what good will there is. Maybe it's the beginning of my Seasonal Affective Disorder - the shorter days, the darker hours, but I've been feeling paranoid at work. I posted on FaceBook today that I didn't understand my purpose here today. I was referring to what was I doing at work when there was so little for me to do and I was somehow made to feel/chose to feel/definitely did feel the vibe of - I'm not good enough to be out in public, so stay in the office behind the curtain you gay goy golem. I felt completely worthless and pointless. Yeah, I was there to write and take down people's information who came without a ticket or made previous arrangements to attend High Holiday services, but other than that, I had little to nothing to do. When I asked if I could help, the only thing I was told was that maybe usher - but since I have no clue as to what's happening in services, how could I possibly help? I was next told there was no room for me out in the hallway. So, for the past 5 years I was well-behaved enough to deal with the general public, taking guff and being told all manner of awful things when I had to turn away people without tickets when we were too full-up to take in any more worshipers hours after services started and were close to finishing for the day. For 4 previous seasons, when I was, oh, 70 pounds heavier, there was PLENTY of room in the hallway vestibule area for my former fat ass. But now, nope, no room for me to stand out in public, to say hello to people I don't often get to see. At one point today I actually had one of the ushers publicly berate me to tell me that I wasn't doing my "job" and that maybe I should be in the office. Great way to feel needed, welcome and wanted. Yep, Shul Business it's a real swell place full of good times.
Email Post
Labels: "Failure/Success" depression religion