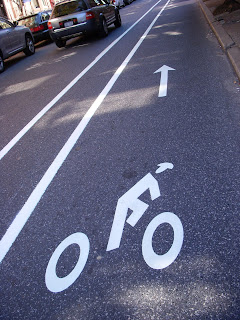 Remember "The Pothole" episode of Seinfeld where Kramer repaints the four-lane highway, intending to make it a more luxurious two-laner, but his efforts only result in mass confusion along a section h of road he's "adopted" while cleaning the roadside? The drivers feel like they can stretch out in their cars along the wide open space Kramer's created. That's exactly how I felt upon discovering the new bike lanes along Pine and Spruce Streets in Center City Philadelphia this past weekend. Cruising along leaning back on the old bike, and stretching out down Pine Street. Yeah, it was a good feeling. Too bad it only exists on a few streets in the City. But man, it's nice that we have it! Thanks to the Bicycle Coalition of Philadelphia, the Streets Department and to our Mayor, Michael Nutter for coming through on this promise! 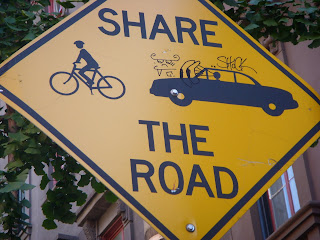 Along the new bicycle road, I found a few interesting finds - this sign between 15th and 16th and Pine Streets has gotten a cartoon make-over. Can't figure out how the person got up here to doodle on it - it's well over 15 feet up on a street pole. 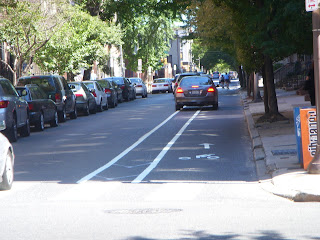 Cars don't seem to get the hang of where they should be - along the lines of our luxurious bike lane, cars are still confused. Oh well, at least there will be minimal parking in our lane. 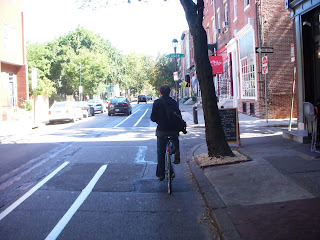 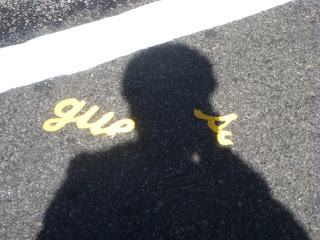 More stickers and linoleum signs embedded in the streets - this one used to say "Guess" but it's started to break apart. This is located at Broad and Pine. There are a series of these around town, mostly along Pine and Spruce Streets. "Believe", "Guess", "Naughty", "Dose". I noticed while taking this arty photo that the material used has a reflective quality, much like the illuminating street paint. If anyone has a clue what these are about, leave a comment. I'd love to know more about these signs. I've added photos to my "found art" pictures on my Flickr site. 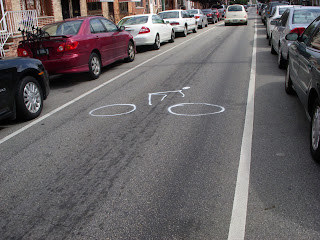 Last bicycle find of the day - not in Center City but rather in South Philly - someone has spray painted a crude bicyclist image along a stretch of Morris Street between 12th and 5th Street. I doubt it's for a bike lane. South Philly just doesn't get bicyclists. Maybe these are a part of an urban street art war?
Email Post
Labels: "Found Objects" biking photos