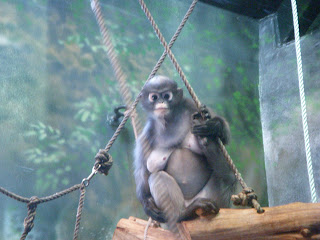 Smashing- (verb): to break up into small pieces; to mash, crush, pummel or puree coarsely; i.e. as in is throwing and breaking pumpkins, or to cook and tamp down potatoes into a soft, yielding comfort food; (gerund) to gayly describe one's appearance in a feigned mock amusing tone adopted in a Noel Coward or Truman Capote mannerism - "Dahling, you look simply Smashing in that frock!"
Smashing is for inanimate objects or to describe one of the women from the Real Housewives of NYC. It is not suitable to do to one's boobs. I had my annual mammogram today, leaving me feeling a smashed and vulnerable; it's how I referred to how my body felt on my Facia Libra status page, smashed like a potato instead of feeling simply smashing. I must have mashed potatoes on the brain because this reminded me of the delicious mashed potatoes I made for dinner last night - a combination of sweet and Idaho potatoes, garlic, low-fat cream cheese, light, Land O'Lakes Canola Butter and skim milk. Decadent enough to satisfy the comfort food cravings but slimmed down enough to justify eating more than a mouthful.

I am not a morning person so I'm not sure what possessed me to take a 7:45 am scheduled "annual lay myself down and get pounded on my chest by an automatic garage door" appointment also known as a mammogram. It's hard enough for me to wake up to do things I like such as swimming or biking before work. This morning was dark and bone chillingly damp. Having an appointment to stand naked before a stranger while she fondled and arranged my deflated water balloons (without the benefit of being taken to breakfast or dinner for this displeasure), was more for making it a morning to stay in bed with the dog, duvet pulled over our heads. The only good thing about having an early morning doctor's appointment is that there aren't a lot of other women waiting for their voluntary trip to second base with photos taken by a stranger. More often than not, I'll schedule my doctor's visits early to get me in and out of their office without interfering with the rest of my morning. I get to work earlier too. Too bad I don't have the same motivation every day. Then again, I wouldn't work as late if I came to work early. The trade off works for me.

Today's appointment was not painless but it was necessary. A few years ago I had a minor scare that turned out to be nothing. I'm one of the many well-endowed (more so before the weight loss) women for whom the "girls" need a few extra look-see's. I tend to be prone to extra fat and lumps in all the wrong places. Each of the exams I've had in the past two years required additional pokes, prods and pictures taken during each exam. This morning between the first imaging round and the waiting period while the nurse and doctors eyed my results, I experience the usual mild anxiety about the results of the readings. I thought I felt a lump in my chest today where there had not previously been one. Sure enough, I was called for round two. Ding! Into the ring again, dropping my hospital gown and stepping up to the box to place my right breast for another bashing. Just as I suspected, there was a question about that right side. Anxiety building, I left the room and headed to the waiting area for another judgement call. It was this moment when I felt most vulnerable. Not when I was topless before the nurse, not when I had two tons of pressure coming down on my breasts while being photographed by a radioactive camera. I felt scared and alone with my crazy thoughts about the what-ifs and oh-no's. The best thing about having scheduled this appointment so early, the doctor wasn't backed up and could review the results quickly. Before I could even allow my screwy mind to launch another thought rocket into Plan Nine from Outer Space, the doctor called me and said, "Everything is fine. We'll see you next year." Whew.

Pre-WW (Weight Watchers) I did not feel the machine pressure as much, I had needless weight cushioning my body and absorbing the squeezing and twisting of Pennsylvania Hospital's state of the art imaging system. Post WW, I can flex my biceps and fore arms to grip the side of the machine and stand closer to the imaging area, but I felt a pain in my chest as the machine smashed down on my boobs. It hurt a lot harder on my 42 year old sagging sacks than it did two years and 70 pounds ago. I never thought I'd be the kind of woman to say this, but I'd love to have my breasts re-done. I want them up where they belong. I want perky, round, C or D Cups, that don't need to be hauled up with leverage, spandex and an assortment of strong industrial hooks. Unless I find that missing lottery ticket worth ten million dollars, I don't think Liz, Santa, or any other benevolent patron exists who might be willing to help me sculpt a Victoria's Secret Chest with a dash of a Hooter's babe thrown in for good measure. Oh well, I've got my good breast health and that's worth a lot more than any chance to win millions or to smuggle raisins without wearing a bra. Alleluia to saving the ta-tas!
Email Post
Labels: inspiration mammograms