It was a sporting day - took full advantage of the Spring-like glorious 50 degree plus weather and went on a 47 mile bike ride with the Bicycle Club of Philadelphia. We road to Ardmore, through several counties and a dozen or more neighborhoods while climbing many challenging hills. Later, Liz and I walked down to Citizen's Bank Ballpark to attend the Phillies Home Opener along with 45,000 other fantantical fans. Our mood went from high and hopeful to dashed into the ground in a matter of innings. Starting pitcher, Brett Myers, gave up 2 home runs in the first inning, along with a run to lock in a loss early on. By the seventh inning stretch, our nerves were as spent as my battered body and aching knees - the Phills were losing 4-zip and both Liz and I were exhausted from our long days. All I can say is - it's early April - there's still time to win ball games and time to work on my hill climbing and breathing abilities. Rest up, it's gonna be a long season! 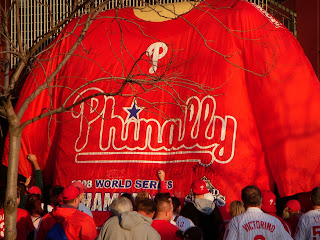 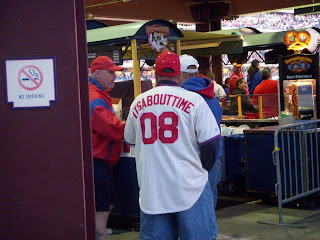 One of the funnier jersey's I've seen around the ballpark 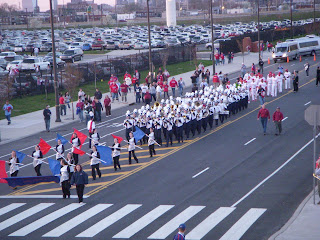 Marching Band from Cardinal O'Hara High School, leading the 2009 Phillies team down Citizen's Bank Park Street at 10th into the ballpark, and through Ashburn Alley 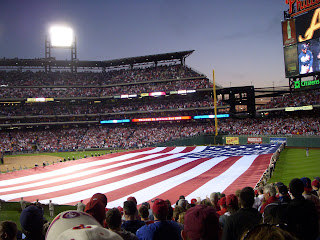 The giant United States Flag for the opening game ceremonies 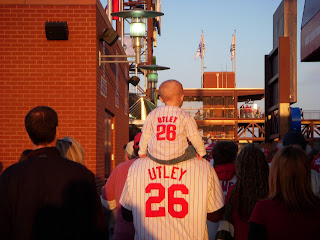