Coming to you live and in person! Friday, Saturday and Sunday at Foster's Urban Homeware, 4th & Market Streets. I'll be working with my buddies, Eric and Robert of City Food Tours, doing a cooking demonstration for an Aphrodisiac Tasting Event on the weekend of love aka Valentine's Day. We'll be making a Sexy Spicy Shrimp and Pasta dish for the event. For those of you who can't join us, the recipe was in last week's Daily News on Thursday, February 5th. It will be great to get back into doing a live demonstration again. I can hardly believe that it's been just about two years since I was the resident chef for Williams-Sonoma, teaching cooking classes on a weekly basis. I don't miss the stress and hard work that went into planning each week and semester, but I do miss the cooking show I created for each class. I'm really looking forward to my 10 minutes of fame again! 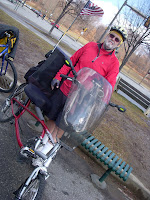 Life has been busy the past few weeks - leading a few tours for City Food Tours, working at the 'gog and my shifts at Williams-Sonoma and then trying to get in my gym time. The weather in the Philadelphia region has favored us with gorgeous spring-like temperatures allowing me to take advantage of biking around the river. It's been too cold to ride much lately. I rode more last winter than I have this year, so any ride I can get is a treat, even a quick 16 mile, one loop around the Drives. It's better than a trip to the gym any day. The winds were forceful which made it difficult to ride faster than 13 miles an hour. The good thing about a harder, shorter ride is that it was a thorough workout. Makes me feel strong. Consistently working out and taking yoga has made a tremendous difference to my overall well-being, something I've been more aware of over the past two months. Not that Tom (I'M NOT GAY But I am a CRAZY Scientologist) Cruise, is right, but he was onto something when he said that exercise is important for your mental well-being. Look, don't get me wrong here, I've been diagnosed with depression; I've been in therapy for the better part of 20 years; I write about the depression a lot; I have taken depression medications to help with the low and dark periods in my life. It's truly made a difference for me. I believe that medication and therapy are both extremely important and should be used as often as necessary. However, my current life plan of therapy, Weight Watchers and exercise yields great results. There is no condoning Mr. Cruise's outbursts however. I do like the results that my routine has provided. The other great benefit besides my current 67.2 pounds lost? All the extra energy I have. Wellbutrin never did that for me.
While trying to keep to up with my three jobs, Weight Watchers and going to the gym, I've also been attending Free Library of Philadelphia Author lectures. I saw three authors in as many weeks -Steve Lopez, talking about his One Book One Philadelphia 2009 novel, The Soloist. Azar Nafisi, author of Reading Lolita in Tehran and her current book, Things I've Been Silent About: Memories. Both authors were fascinating writers of great reads and providers of much to information to ponder. Last week I went to hear New York Times Food Columnist and Cookbook author, Mark Bittman, aka The Minimalist. He gave a talk about his new book, Food Matters: A Guide to Conscious Eating with more than 75 Recipes. Mr. Bittman is my culinary idol, more than my favorite trio of culinary goddesses, Ina, Martha and Nigella. He is down to earth; cooks and writes recipes that I love; and his writings have inspired and taught me countless facts about food origins. During and after his talk I could hardly contain myself because I was so excited have seen and listened to him in person. His new book contains salient points about the American Diet and its excessiveness in all aspects - food and energy consumption; our over-bloated food dependence on animal based proteins; our continual need to SuperSize ourselves and our plates. Among the many striking things Mr. Bittman said was this gem - "If you shop too much, you are a shopaholic; if you work too much you are a workaholic; have sex every time you think about it, you're either a sexaholic, sex addict or nymphomaniac; but if you eat too much, you are an American!" 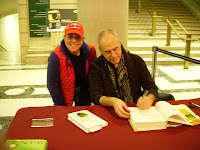 There was much in Mr. Bittman's lecture/reading that hit home for me, but nothing more so than his own discovery of his weight catching up to him and wrecking havoc on his health. Similar to what happened to me, Mr. Bittman discovered at age 57 that his weight had risen to an all-time high well over 200 pounds. His cholesterol, blood pressure and sugar levels were dangerously high. He would have to go on medication to control it all. Rather than be dependent on well-meaning medicine, he refocused his attention on his diet. At the same time, he started to become more aware of reports issued by the United Nations and other Global agencies that described the looming global food and energy crisis. He saw a connection to food over-production, energy consumption and the world's obesity problems. Changing his own dining habits on a small level, Mr. Bittman started consuming more plant-based foods and fewer animal based meals. Out went sugars, worthless white carbs such as white rice and sliced bread, behemoth bagels and cakes. Within a month he lost weight, without even realizing or trying. After several months, he was down more than 40 pounds and his health was back on track. Mark Bittman is decidedly anti-diet, pro mostly vegetarian, or as he said, less meatarian, and does not necessarily advocate eating local or organic as part of one's plant-based diet. As he said during the talk, "if you are buying a whole wheat rice-puffed cereal, sweetened with brown rice syrup, or eating organic 'Snackwells', it's all still crap if it's processed food." The further away you get from the foods natural state, the worse it is for you. Like Michael Pollan's book, The Omnivore's Dilemma, Food Matters is a wake up call to the world, on a much more accessible and personal level. Plus, there are practical recipes along with Mr. Bittman's insightful and pithy commentary. I'm sure I'll be recipe practicing and sharing over the next few months. He mentioned a breakfast couscous dish; an idea that I've been meaning to write about for almost a year now. I'm curious to see if his recipe and the one I've been making are similar. Go buy this book and remember to eat your veggies! 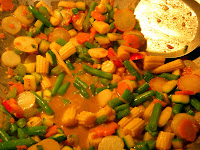