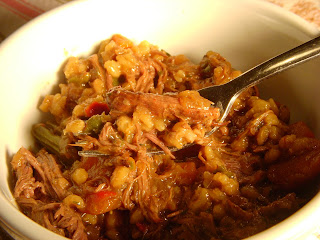 Today was a day for comfort foods. Not because it was cold or dreary, but because it is still winter and I needed to make a big batch of something delicious. I was just given a "new" large slow cooker. I was talking with some friends about the merits of cooking in a Crock Pot and that I regretted not having a larger one to use. I have a small one but inevitably whatever I make usually has to go into a large Dutch or french oven or stock pot as I make too large much food to fit into my wee slow cooker. My friend, Dana and I were talking about this and she realized she had one collecting dust under her bed and that she should pass it along to me. It's gathering dust no longer because today I whipped up a batch of Beef and Barley Stew braised in Lancaster Milk Stout Beer. The stew cooked in the slow cooker for hours and turned into an inky deep, dark and delicious meal as its aroma permeated the entire house. 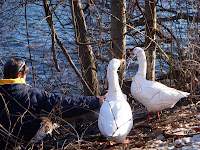 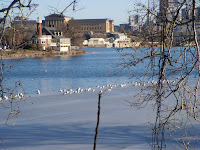 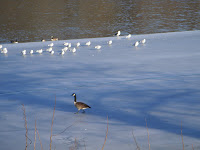 While the stew braised and bubbled, I headed outdoors for a mid-winter bike ride on a glorious day - a gift from the winter gods. The temperatures climbed into the mid-40's and the sun was bright. Donned my biking gear and my new bike shoe booties to keep my tootsies warm. They actually work - no more toe Popsicles! I got in a double loop around the river, 24 miles total! I watched the birds walk and sit on the ice floes and watched a woman feed several dozen Canadian geese, ducks and a pair of white geese while she sat along the river banks in the brush. I also ran into an old friend and walked and talked with her for about a mile and a half. It was a fantastic day made all the better because I had a scrumptious meal awaiting my return home.
This recipe is meant to be cooked in a slow cooker for 4 to 6 hours. For best flavor, sear and brown the beef and saute the vegetables before putting them all into the slow cooker. You will need a large dutch oven or stock pot as well as a slow cooker large enough to hold all of your ingredients - 5 to 8 quart capacity. A darker beer will work better than an ale or light beer, I suggest using a Porter or Stout. If you don't have beer, hate it or wont' use it, then a good dry red wine will work too. Can't handle the booze? Soda Pop might be an option. Use 1 can of Coke, Dr. Pepper or a snappy root beer or sasparilla soda. The stew will be sweeter, but the flavors will still be great.
Beef & Barley Stew braised in Beer Ingredients: 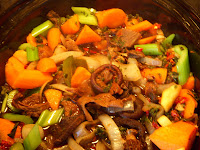