Beans & Rice - Tricked out and Amped Up 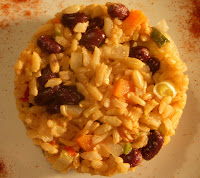 Had an extremely lazy weekend by my standards. I practically did not leave the house at all on Saturday, except around 10:30 pm to walk the dog. Liz and I have been working a lot; she's been in non-stop rehearsals at OCP for the current production of Turandot. Friday night was opening night and we stayed out late, enjoying the fruits and spirits of everyone's labors. Came home after 1:30 am, and didn't get to bed until close to 3 am. Seems like old times...I slept until after noon! Even more familiar old times. The grand plan was to have a day at home and do some household chores, which held no interest for either one of us. Chores - as though we are the Wilder Sisters and Ma and Pa are making us walk the mile out to the barn to milk the cows and feed the chickens! HA! Fat chance. Instead the only chickens we fed were ourselves, and I'd say after the eating and lazing about, I'm more of the fat cow than the spring chicken...but I digress. We did eventually get some light cleaning completed, in between snacking and snoozing, watching movies and ample viewings of the luscious offerings of the food network babes. There is a connection here, stay with me on this one. After several helpings of food porn, gorging ourselves viscerally on Nigella's chocolate delights and Giada's tempting treats, a sensible meal was provided by Ellie Krieger. Of course by the time we got to her show, Healthy Appetite, we were punch drunk crazy from all the television garbage we had consumed during the day. Ellie's show is good - practical, easy to make dishes that are genuinely good for you without fake props, booze or butter loaded into each dish. What got us going was that in the episode we watched, Ms. Krieger kept saying the phrases, "tricks of the trade" and "amping up the flavors." Normally I would not notice the phrases if they were said once or twice, but after the fourth time in the first recipe, we were ready to play a drinking game, forced to chug back a shot every time the words amped or tricks were uttered. I suppose it's funnier in the context of laying about all day while you are still in your pj's, sporting a fierce Eraserhead style bed head 'do and creating a sink full of dishes, while you also discard the newspaper sections you've casually skimmed though so as to make some sort of appearance of having done something productive...Whew!
There were several recipes that I would like to make, amping them up in my own style of course. One of the dishes Ms. Krieger made was beans and rice which caught my attention. Who doesn't have beans and rice on hand? It's the perfect protein meal, and you can use just about any kind of bean and a healthy mix of the holy mire poix trinity to make it pretty and veggie packed. Plus its a great side dish, hot or cold. My recipe version was as a hot side dish. To serve it as a salad or cold dish, you have to "amp up the flavors" more and/or make a lime juice vinaigrette to increase the taste and keep the rice grains moist.
Ingredients: