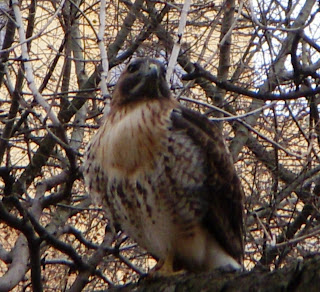 I've been bird watching again, in Rittenhouse Square. On Thursday, I went out for a cup of coffee around 2:30, and walked through the Square on my way over to La Colombe. As I was wandering through the Square, I looked up in the trees to see if I could spot the hawk that's been stalking and living in the park for the past few fall/winter seasons. Within seconds of looking, spotted it, and as a bonus, witnessed the hawk swoop down and catch a brown rat! Ghoulish, yes, but it was also a real live nature adventure. The hawk then flew from the 19th Street Corner to the center of the Square and alighted on a low branch, with the rat it its talons. The hawks mate was flying high overhead. I watched the hawk for about 10 minutes and then it just got too darn cold to stand around taking any more paparazzi photos! The hawk was on this branch for at least 15 minutes, as it was still there when I walked back to the office. 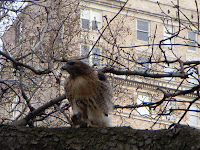 The hawk is adjusting itself on the branch while keeping hold of its fresh kill. 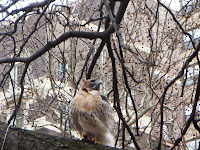 This was the first time I could definitely identify what kind of hawk has been in the park. It's a red tailed hawk. As it landed in the tree, its tail feathers were spread in full, showing off its rust coloured plumage. 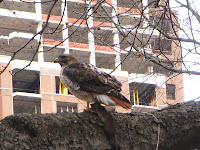 Look carefully at the base of its talons, along the branch. That's the rat! This bird is my hero! I hate rats.
Email Post
Labels: birds Hawks RittenhouseSquare