A special shout out to all of you who have been following my blog! Hello out there Lynette, Dana, Jen, David, Leslie, Renee, Lisa, Rabbi, the Susan's and Sue's, Roger and Astrid and many other readers! It gives me such a thrill to know that you all have been following my journey of cooking, biking and photography. I do try to write as much and as often as I can but sometimes time just gets away from me - what with all the cooking, biking, photography and that pesky thing called my many jobs! To be frank (and no, I'm not cross dressing here letting you onto my alter-ego named Frank, his name is David anyway...), because honesty and being forthright and upfront are a few of the qualities for which I am known (those and for just plain speaking my mind and inserting my foot into my mouth a lot. Good thing my shoes are tasty.) I'd rather be biking and cooking and taking pictures so I could be writing about my three passions more often. But we have to be able to afford to eat and pay for my hobbies and the clothes that they require, so off to my jobs I must go. And oh, I do love my jobs, even though I can bitch about the High Holiday ticket debacles and what whinny bridezilla or greedy inept groom we've had to deal with for a registry at the pot and pan heaven. I love my co-workers fiercely and have formed many a close bond with so many people with whom I work. As you know, if it weren't for the Rabbi, I wouldn't be biking. If it weren't for my team of co-workers and managers at Williams-Sonoma, I wouldn't be able to afford cool kitchen gadgets or have met the guys for City Food Tours. So in celebration of my jobs, which affords me the possibilities of my life I pay homage to the daily grind and say, thank you! And now onto my regularly scheduled installment in the life of the Bicycle Chef! 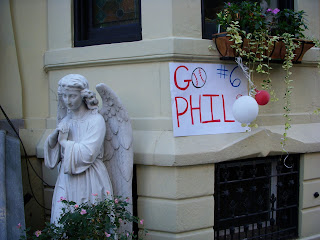 Praying Angel and Go Phils #6 (that would be Ryan Howard by the way). Found this charming scene around 20th & Delancey Street in Center City on Saturday, October 11th. 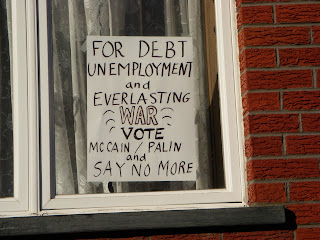 Just when I thought all of the folks in my neighborhood had lost their minds and were all voting a McPalin Ticket, I came across this sign that just gave me pause and hope. Say no more! 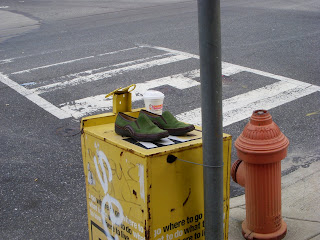 I've been finding random shoes left in random places all over the city. The great thing about always having a camera is that I can snap this images just as soon as I spot them. Case in point, here are a perfectly good pair of Aerosol Shoes that someone left next to a cup of Dunkin Donuts Coffee, on top of a Philadelphia Weekly newspaper box. I have several pairs of shoe photos at my Flickr photo website. Check it out sometime. And if you care, send me photos of found shoes too. I'll add them to my growing collections. 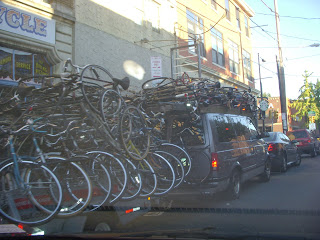 And speaking of my photo collections, I've also been documenting cool and unusual bikes or mopeds that I've seen in my travels. On Tuesday, October 7th, we spotted this van outside of Via Bicycle loaded with used bikes and spilling onto the street behind it. Via is a used bike shop that specializes in old bikes and great repair work. My guess is there are over 100 bikes loaded up here. On another bike excursion this week, I spotted a man on a bike with a dozen or more bike wheels and parts strapped to his back, body and bike. I didn't have time to snap a photo though, so I'll have to keep on the lookout for this fellow again. I suspect he's a regular in my neighborhood who does a lot of salvaging and scavenging for scrap.

If you enjoy these photos, don't forget, you can click on my photo sight to the right of these entries. I have a Flickr Photoshow running with my most recent uploads. At my Flickr sight you can see more than 2,000 of the images I've captured in the past two years. Whew! I told you all I'm busy! My Flickr ID is Neenyd03 in case you want to do your own search!
Email Post
Labels: "Philadelphia Sights" photos