It's been an unusual week and it's only Wednesday. The High Holidays are upon us at the synagogue, and after five "seasons" of working the door at the Temple, I still find the whole process stressful. This year has not been as bad as last year. Mostly people have been nice and there haven't been too many tales of "I just moved to the area" and I want to "try your synagogue out for the High Holidays." This translates into, I don't want to be responsible, pay dues or support your temple, and I want you to do me a favor even though you don't know me and I am most likely never going to be supportive or nice to you and the synagogue...Ugh. I wrote a lengthy rant about this last year on my old blog so there's no need to rewrite the same stuff again. You can read my account from last year, or watch a YouTube video of Curb Your Enthusiasm about the madness of High Holiday Ticket Scalping. As Woody Allen said in Manhattan - and I'm paraphrasing here, the more expensive high holiday tickets get you closer to God. And speaking of tickets, because I was...The Phillies have made it to the Playoffs. Liz and I are big Phillies Phans with a Capital PH! She went to the Saturday game where they clinched the Division, and we both attended the final game of the regular 2008 Season. Exciting games and lots of fun. Today was the first game of the National League Division Series East, to determine which team will move onto the Pennant Race. The Phillies played the Milwaukee Brewers. We live just about 2 miles from Citizen's Bank Ballpark and I figured it would be fun to take a quick bike ride down there to check out the fun and festivities. I had a vague notion that I would try to get a ticket to the game. However, since I am cheap and tickets through scalpers and Stub Hub were outrageously expensive, I wasn't sure how I would actually afford to purchase a ticket. It's not like at the Temple where I can just walk up and expect to be accommodated...Anyway, as I was wandering around and taking in the sights and sounds of the 1st game festivities, I noticed that one of the ticket sales windows was open and doing a brisk business. I went up to the window, not expecting any thing to happen and low and behold, I was able to purchase a ticket for $40, in section 107 - not in the nose bleed vertigo inducing upper decks! Yeah! I had no idea that I would get into the game and when I called Liz to tell her, she was, as one could imagine, a bit, ahem, upset with me for a moment. She had to work at 6:15, and the timing of the game was a bit wonky. While it was not nearly as much fun as when we go to the games together, and I really did miss sharing the experience with her, it was a great game because the Phillies won. Here are a few of the high lights of the day: 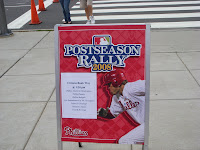 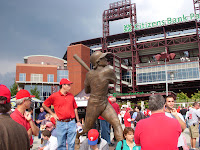 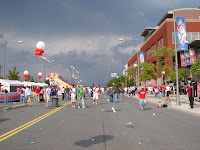 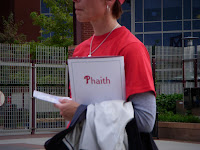 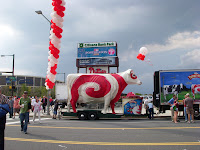 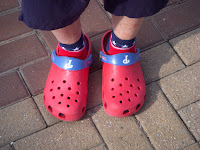 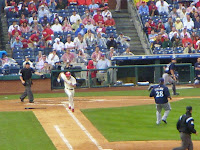 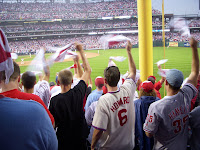 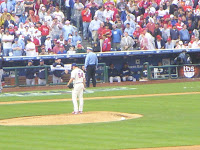 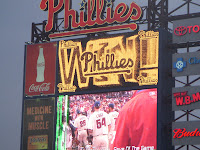