On the Road to the World Series! 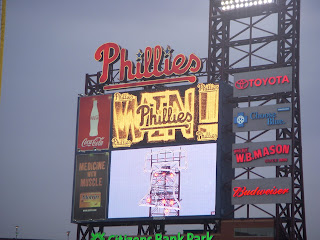 In case you have been in a coma or living in a cave with a terrorist named Osama Bin Laden, The Phillies clinched the Pennant last night to win the National League Division Title for the Best Team in the National League for 2008! Yeah! Thank You Phillies! Now we head into the World Series, but first there is a bit of celebrating to do. I was at Misconduct Tavern, a bar at 15th & Locust Street last night, watching the final innings of Game 5 vs the Los Angeles Dodgers. It was the most exciting shared communal television view experience as any I can remember. Certainly lightens my memories of other news worthy television events that I've witnessed in my lifetime - The Clarence Thomas/Anita Hill trial and the infamous OJ Simpson Trial. The Phillies win is the highlight of the low lights of being with strangers on the street all watching in anticipation the outcome of a major, almost life altering event. Strange that these are the tv memories I have, but there they are. Glad that the Phillies are on the positive side. Here are some of the sights and fans of the winning final inning. 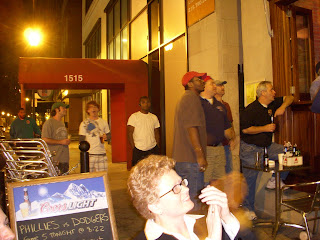 Waiting for the final pitch and catch of Game 5.
This is our friend, Colleen applauding a great final inning. 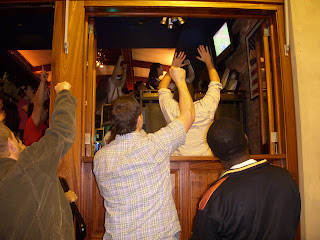 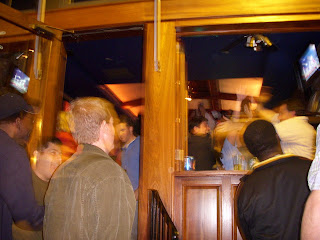 Group Hugs are about to ensue! 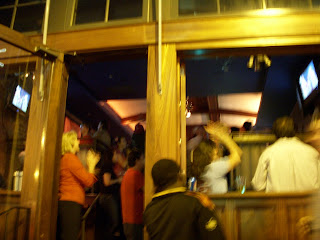 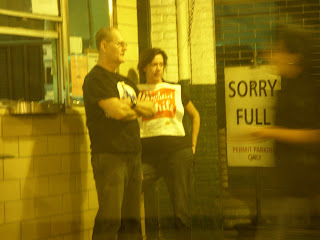 Fightin' Phils rally towel as a shirt.
The parking lot might be full, but the phans are hungry for a win! 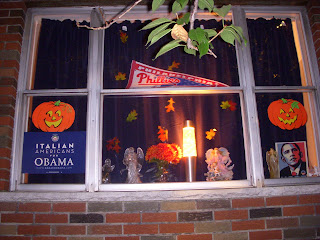