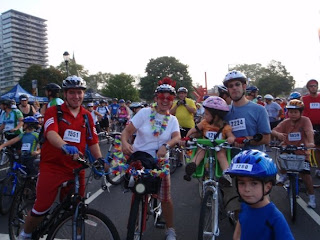 Photo credit: taken by Jill J. In red, Jason, center - moi, Sammy & Derek & Ryan ( front) at Bike Philly 2008.
It's been extremely busy and productive past week and a half. Lots of biking, cricket recipe idea germinating, gearing up for the High Holidays at the 'gog, and some other project developments. This past weekend I went on 3 different bicycle rides - my morning 25 miler with Sue S. and another friend, Derek J. We do the double loop around the Art Museum and the Drives, heading up Kelly Drive, over East Falls Bridge, down West River/Martin Luther Drive and then back up and over the bridge to come back down Kelly Drive again. It's a moderately paced 13-16 mile, 2 hour bike ride. As Sue said to me the first time she suggested I get up at 5:30 am to do it (we meet at 6:30), it energizes you. I feel so much more productive for the rest of the day. 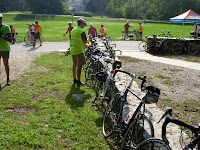 Saturday, the Bicycle Club of Philadelphia had their 12th Annual Scenic Century Ride. You could ride an eight, 25, 35, 65/69 metic century or full 100 mile century ride. I opted for the metric century, or 65/69 mile bike ride up into Montgomery County, deep into Collegevile and the Schuylkill Valley area. The forecast predicted a lot of rain, heat and humidity. Luckily, the rain came early on Friday and left town by Friday evening. The heat and humidity came a calling, but it was manageable for the most part. There were a few times when climbing the hills made it hard to breathe, the air was just too thick to take a deep breath but otherwise, the weather and my strength held out long enough for me to ride the metric century and add a few additional miles to make it a 75 mile day. 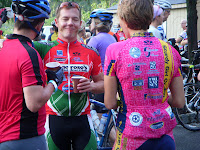 The Saturday morning ride meant yet another early morning out to meet up with fellow cyclists, though this time I actually didn't know anyone at the start. I took my chances and decided I'd ride with whomever I happened to meet. As great luck would have it, I met some wonderful cyclists and tagged along with a group of people who ride regularly together - Itzza, Barry and Jim. We all had similar cycling paces - not riding much past 17 miles an hour on the flats, averaging around 14 miles an hour for most of the ride. We rode together, letting folks fly past us as though they were all in the peloton of the Commerce Bank Triple Crown Race. Where these folks were rushing off to I don't know. It was a ride, not a race, and it was scheduled for the whole day. It's called a Scenic ride - designed to allow you to take in the scenery and enjoy the ride. That's definitely an issue about other cyclists. Get some spandex on their butts and a wacky cycling jersey, and suddenly everyone is Lance or Valverde or the Great Greg LaMonde hammering up the big hills in Nantes. Ugh! I'm generalizing here, but I think I could find a lot of riding pals to back me up on this, other cyclists tend to behave like badly reared elitist riders. We're not that exclusive of a club guys and gals - lighten up, go slower and enjoy scenery. If you were really a pro, you wouldn't be riding along the River Drives for god's sake! Enough already with the attitude! 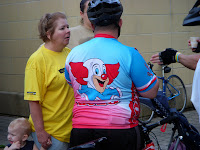 Aside from my rant here, the ride was fun, as scenic as promised and not that difficult. I rode the majority of the century with just one other person, Jim. We left our buddies behind at the first big rest stop. We had taken too long along the way, stopping to chat, help other people with flats and in general, riding just a bit too slowly. We only went 12 miles in 2 hours and Jim and I really wanted to ride the 65 miles. We sped along, just the two of us and hammered it out by ourselves, dead last along the route. Thank god for the SAG cars, the cue sheets and the street markers. The SAG car kept circling back to make sure we were okay, and the street markers helped us keep along the route. Jim and I, now old friends, rode a steady pace, meeting up with other slower riders, or those who were lost, all the while taking in the sights of Montgomery County, gentleman farm lands, Prep Schools, Cricket Clubs and Golf Courses. Two of the most scenic sights along the way were photos taken only in my mind's eye - a pond along the grounds of a preparatory day school had giant Lily pads and flowers the size of a home satellite dish, like a scene out of Woody Allen's movie, Sleeper. They were sticking straight up into the air, facing the sun. After climbing one of our bigger road hills, the sight was magnificent to behold. Nature putting on a show. The other great image I got to enjoy was 26 miles out of the City. We came to Potshop Road, somewhere in the North Wales area. At the top of this hill, was a scenic view of the Schuylkill Valley and the Philadelphia Region. It was a bit hazy and overcast, but the view was nonetheless breath taking. 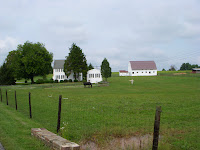 We made it to mile 32, four hours after our 8 am start. Refueled with peanut butter and jelly sandwiches - manna from heaven! - oranges, bananas, trail mix and lots of Gatorade. By this time, we were in Evansburg State Park, heading into the Perkiomen and Valley Forge areas. The choice of routes home and to the next rest stop 12 miles away was a no-brainer; take part of a 5 mile hillier route, or a flat gravel trail through a state park. We, along with many other tired cyclists, took the shorter route and let our butts and arms deal with the bumps along the ride. Hey, there aren't any awards given out just 'cause you are a masochist to the bike! Riding home along the Perkiomen trail was nice and easy though crowded. Made it back to Philadelphia and to Boathouse Row around 3 pm. Downed some pizza at the finish line festival and more water and then came home to clean up and visit with some friends for dinner. I think I was a bit more wound up and wacky than I am on any other given day, but at least I'm sure I made for some interesting company at dinner that evening. Nothing like the endorphin high of exercise to dope you up and keep you going on a natural high. 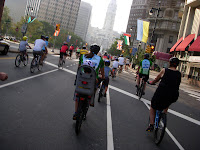 Sunday - it was the 2nd annual Bike Philly Ride. When I signed up for the ride, I had planned on doing 35 miles. As if! Since my friend, Rachel, is visiting from Arizona, and we had not one, but two Phillies games to go to on Sunday - a rained out game from Friday night postponed to Sunday night, and day game tickets for the Sunday afternoon game - I decided, wisely to only go on the 10 mile Ride for Everyone, through the closed streets of Philadelphia. I rode my beach cruiser, jazzed it up with decorations, and donned some devil horns and flame sunglasses and had a blast! I'm glad I only rode the short ride, my butt couldn't take much more biking for one weekend. Overall mileage, from Friday to Sunday - 122 miles, give or take a mile or two. I broke the 500 and 600 mile mark on my road bike odometer between Tuesday morning and Saturday afternoon. Quite a change from thinking that a 20 mile ride was a lot to do in a day a year ago. Biking - it's a good thing.

Here's a clip I filmed at the start of the 2008 Bike Philly ride. Listen for the ubiquitous Rocky Music. It's not a day in Philly near the Art Museum without our unofficial theme song roaring in the background!
Email Post
Labels: "Bike Philly 2008" "Scenic Schuylkill Century" biking